It only took a few months for the pandemic to change the economy. Some shifts, such as the rush for gold, were temporary, others, such as the electrification of transportation, accelerated. Here is a summary of what the recently released international trade data tells us about the winners and losers of 2020.

Some of these changes could be attributed to people working from home. Instead of crude oil (↓ -$352B), cars (↓ -$123B), and refined oil (↓ -$260B), people spent money on computers (↑ $21B), broadcasting equipment (↑ $29B), and headphones (↑ $2.4B). And with soaring demand for electronics, our need for critical metals and integrated circuits skyrocketed too. 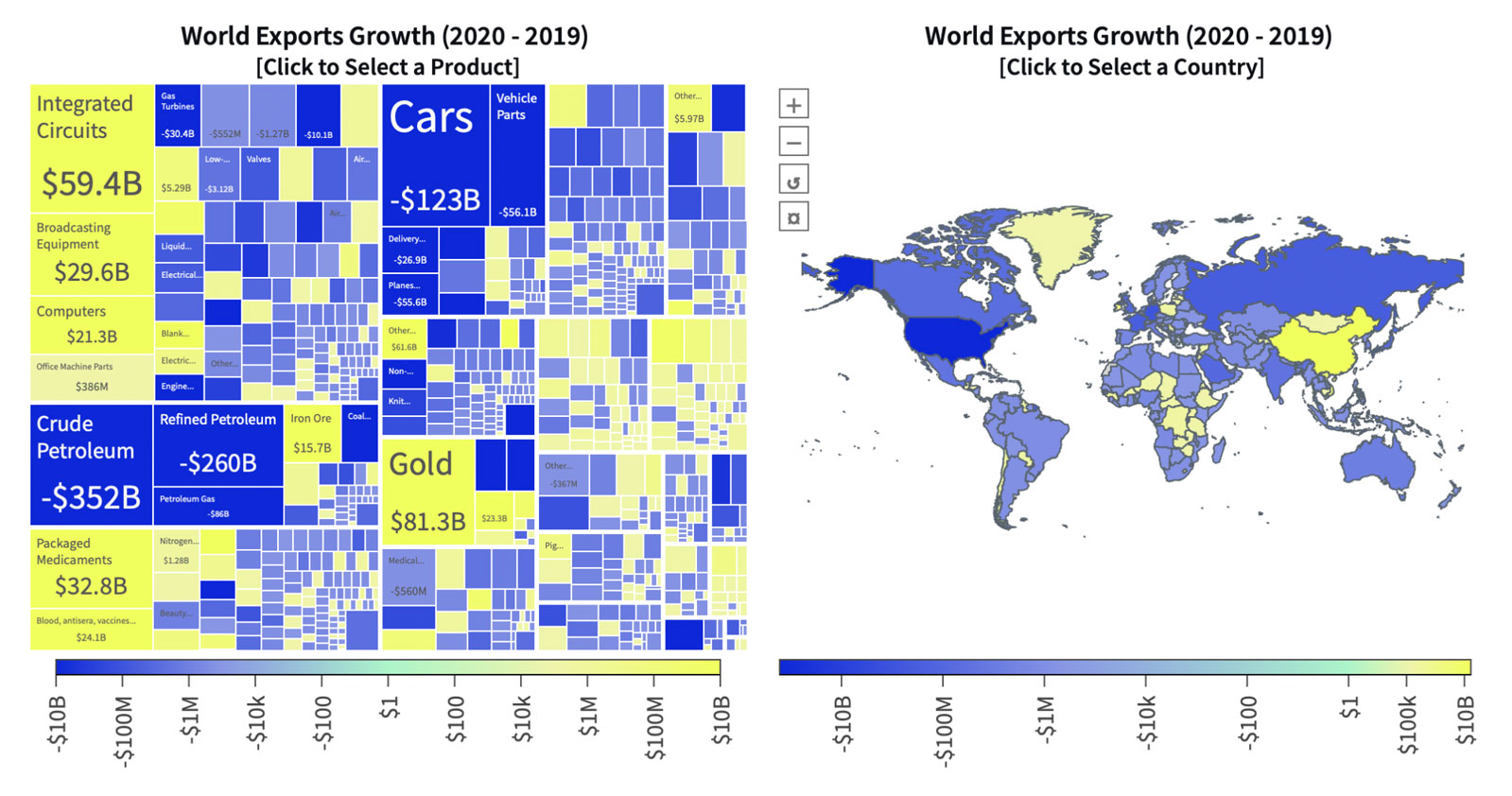 But before we get to trade winners and losers let's look at how we got here.

On January 23, 2020, China made the unprecedented move to close off Wuhan, a city of 11 million people. With every day that passed, authorities set additional lockdowns. By mid-February, the country in control of 15.86% of global exports had effectively shut down. 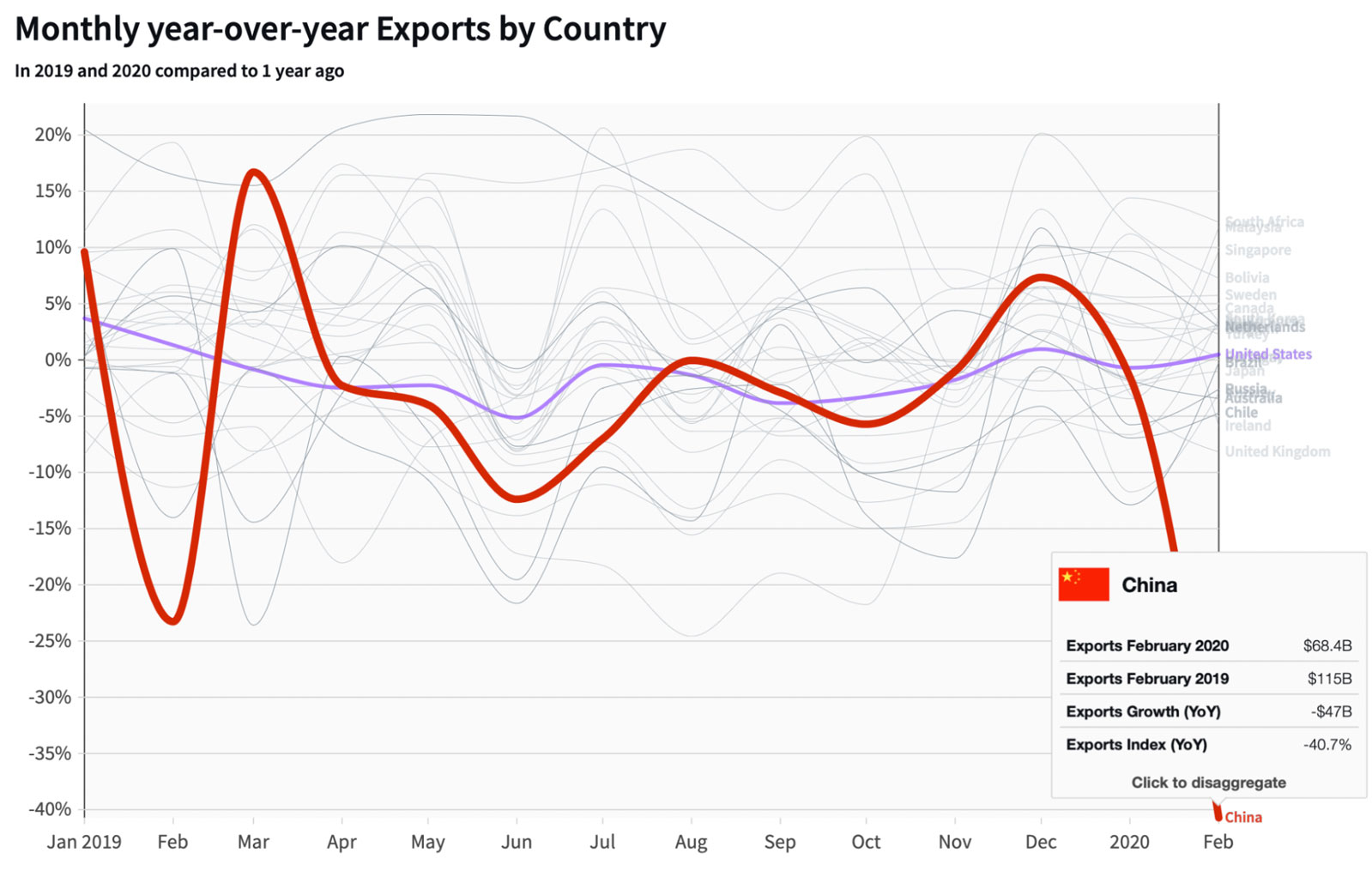 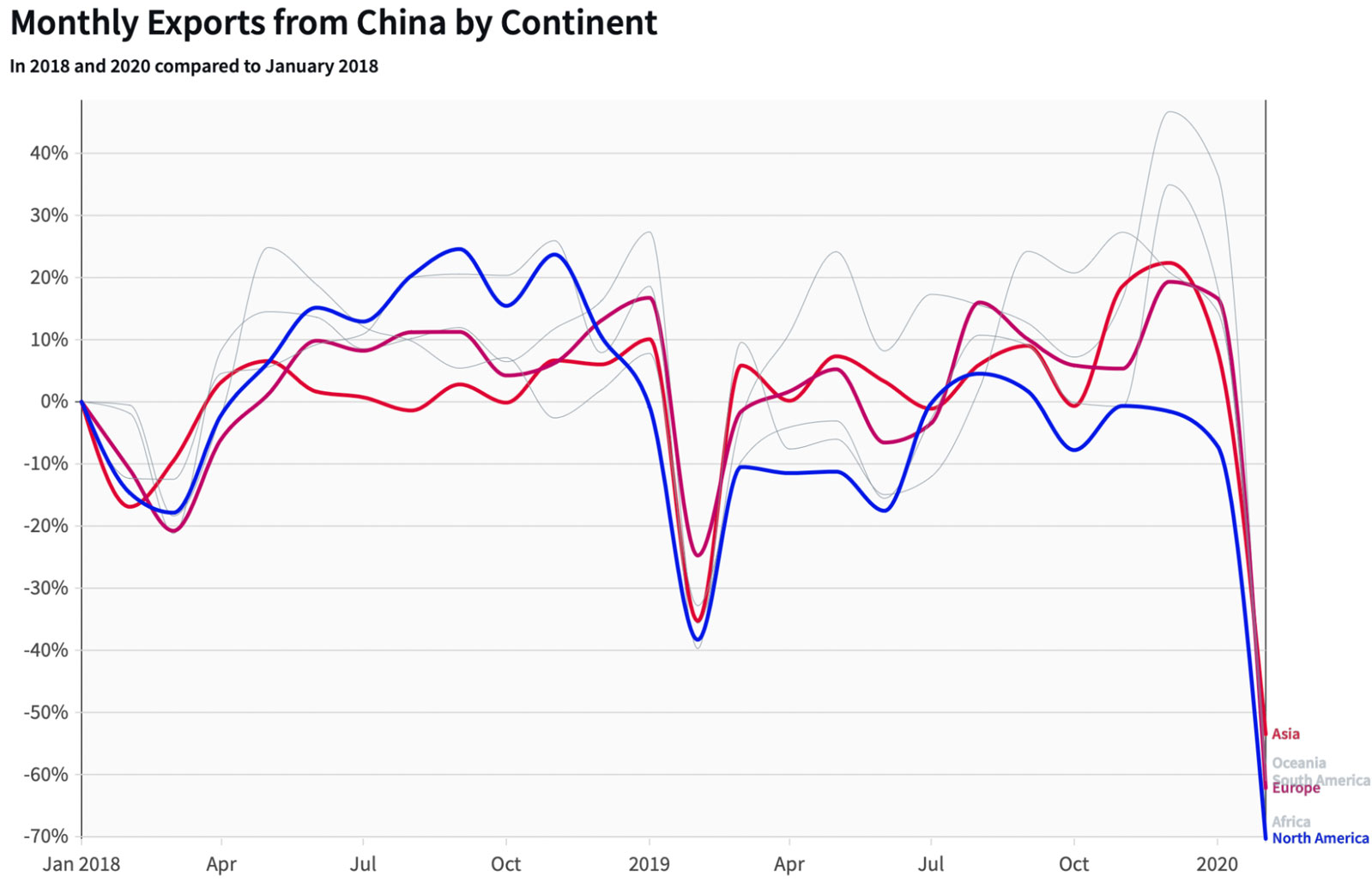 With schools and businesses closed, demand for cars declined. With fewer combustion engines on the roads, refineries cut gasoline production. In just a few months, the demand for fossil fuels shifted, declining by 750B or -33.6%. 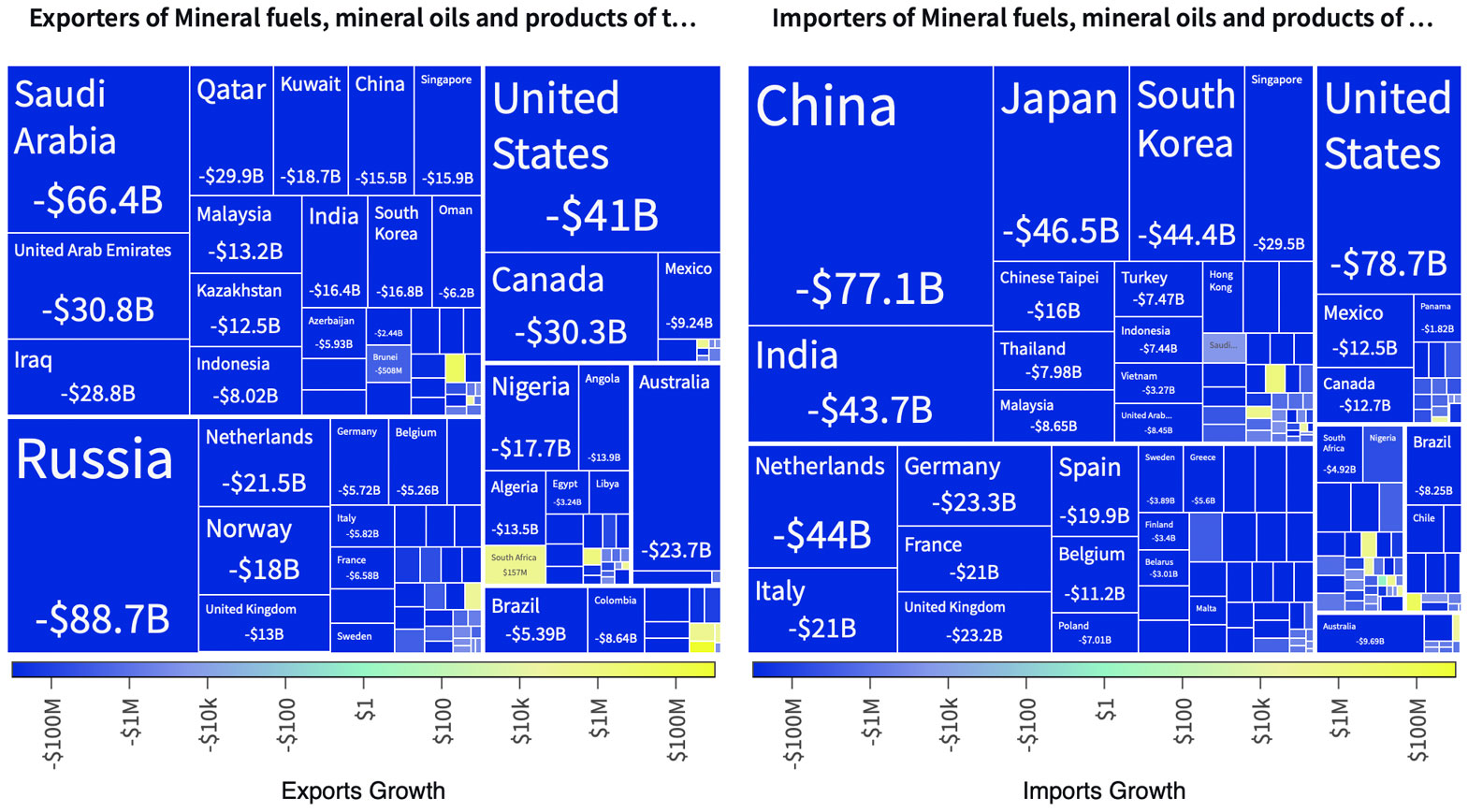 By mid-March of 2020, a sense of anxiety pervaded the financial sector. The U.S. Treasury bond declined at a pace we had only seen during the 2008 financial crisis. With the fall of stocks, bonds, and other investments, investors turned to gold in Zurich (↑ $87.4B), London (↑ $83.7B), and New York (↑ $48.2B), a metal seen as a safe-haven token when the economy is highly volatile. 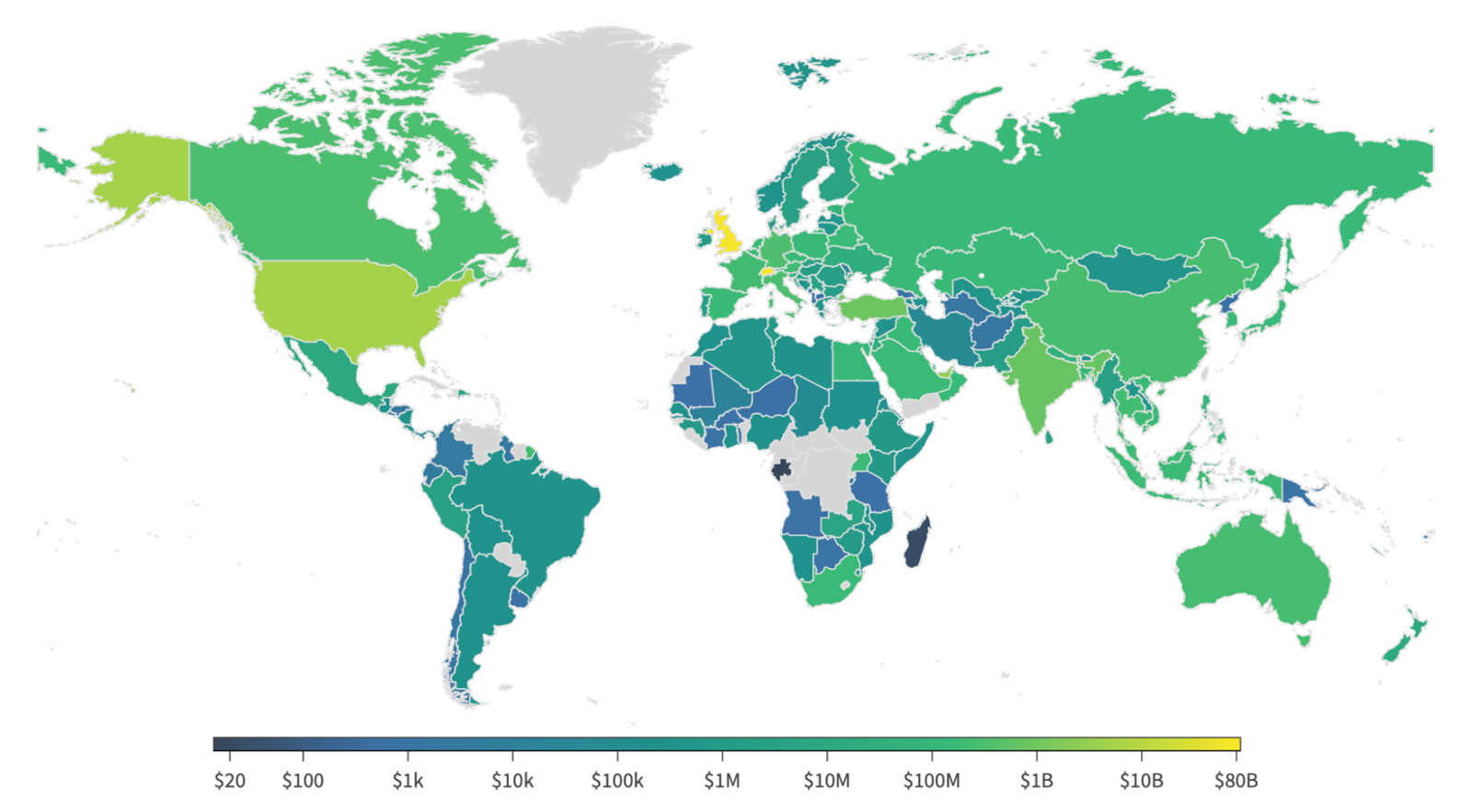 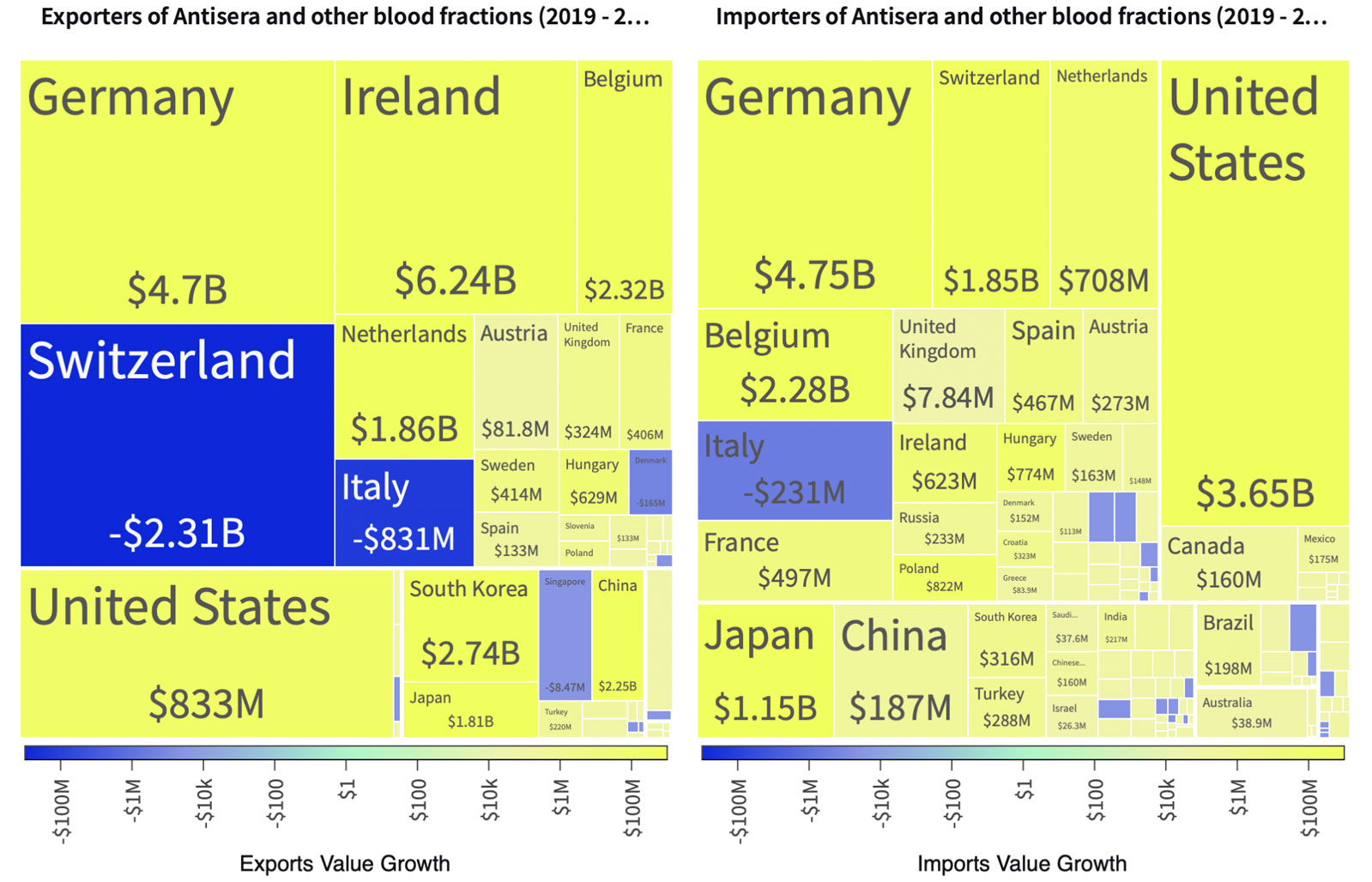 By the summer of 2020, exports from the U.S., Germany, and Japan were on track to return. However, even as global demand increased, some industries faced the effects of the shutdown on supply chains.

At first, the auto industry didn’t experience the full impact of China’s lockdown–manufacturers’ schedule drops in imports from China due to the lunar new year, so they have more in inventory. But it didn’t take long for the crash to arrive. 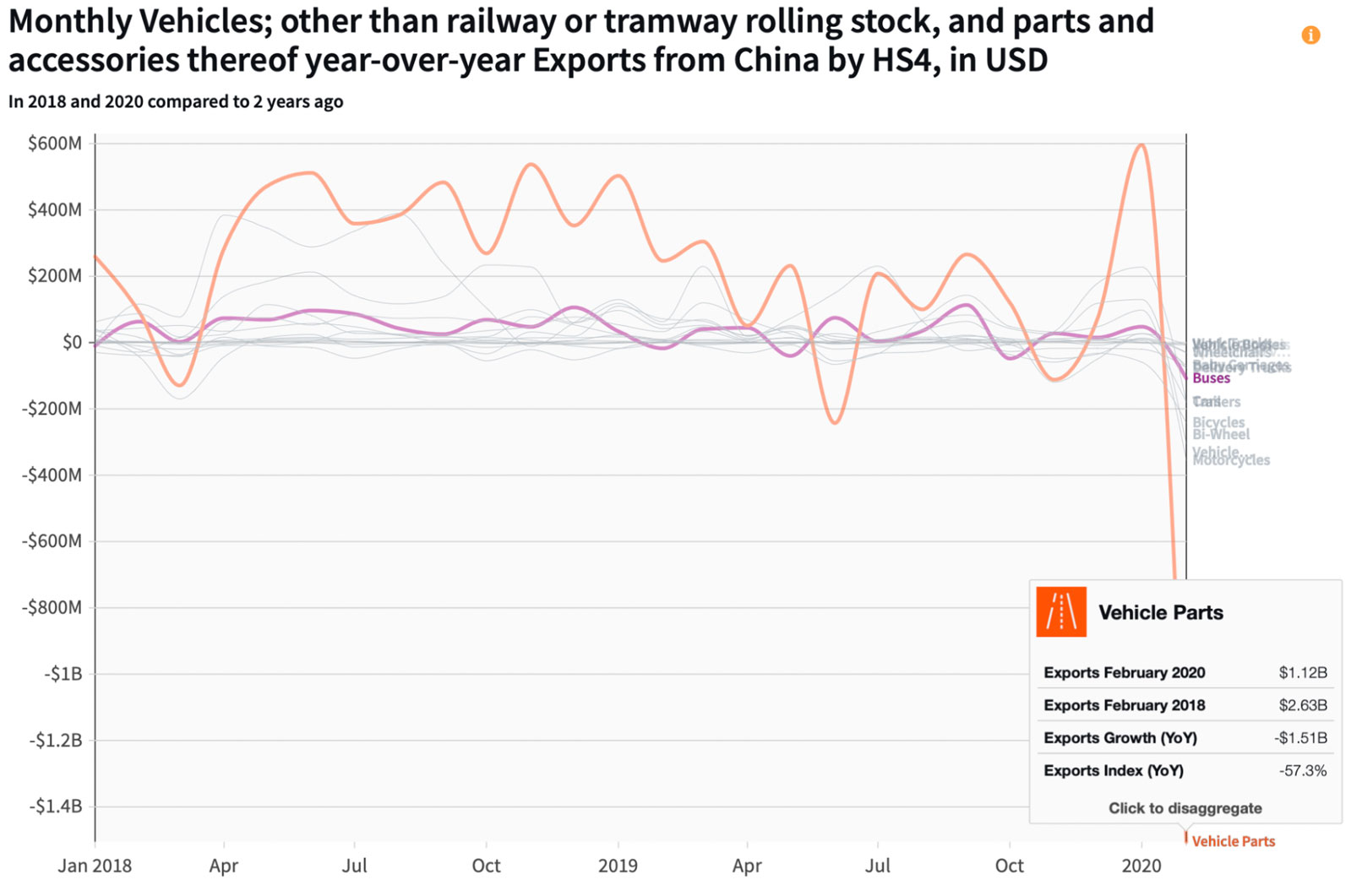 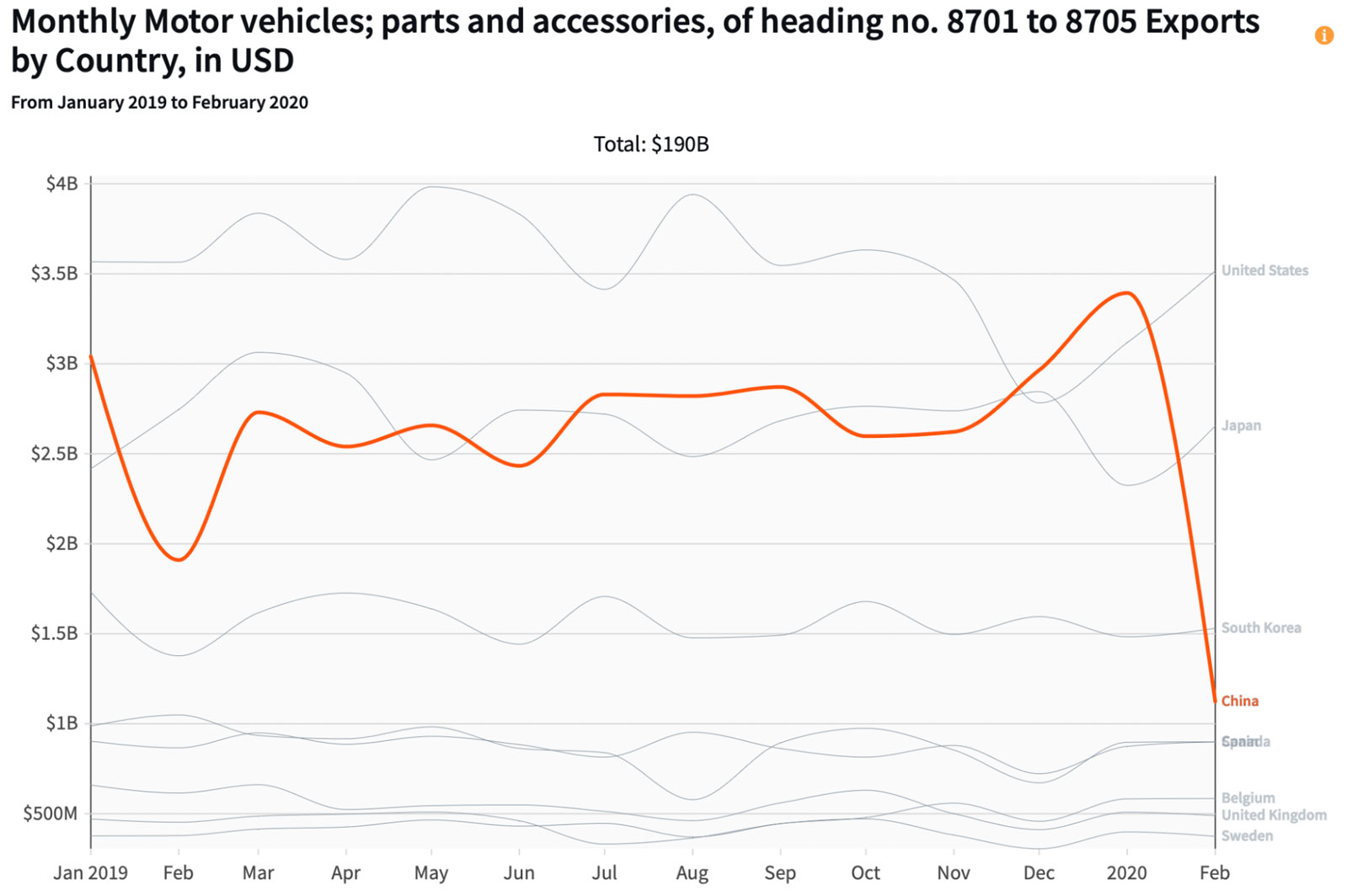 Volkswagen, General Motors, and Tesla announced supply-chain bottlenecks in North America in March. Renault and Hyundai shut down in South Korea, not because of lockdowns, but because they could not assemble cars without parts from China. Nissan in Japan and Fiat Chrysler in Europe soon followed. Before the end of the month, the car industry was bracing for a shock. 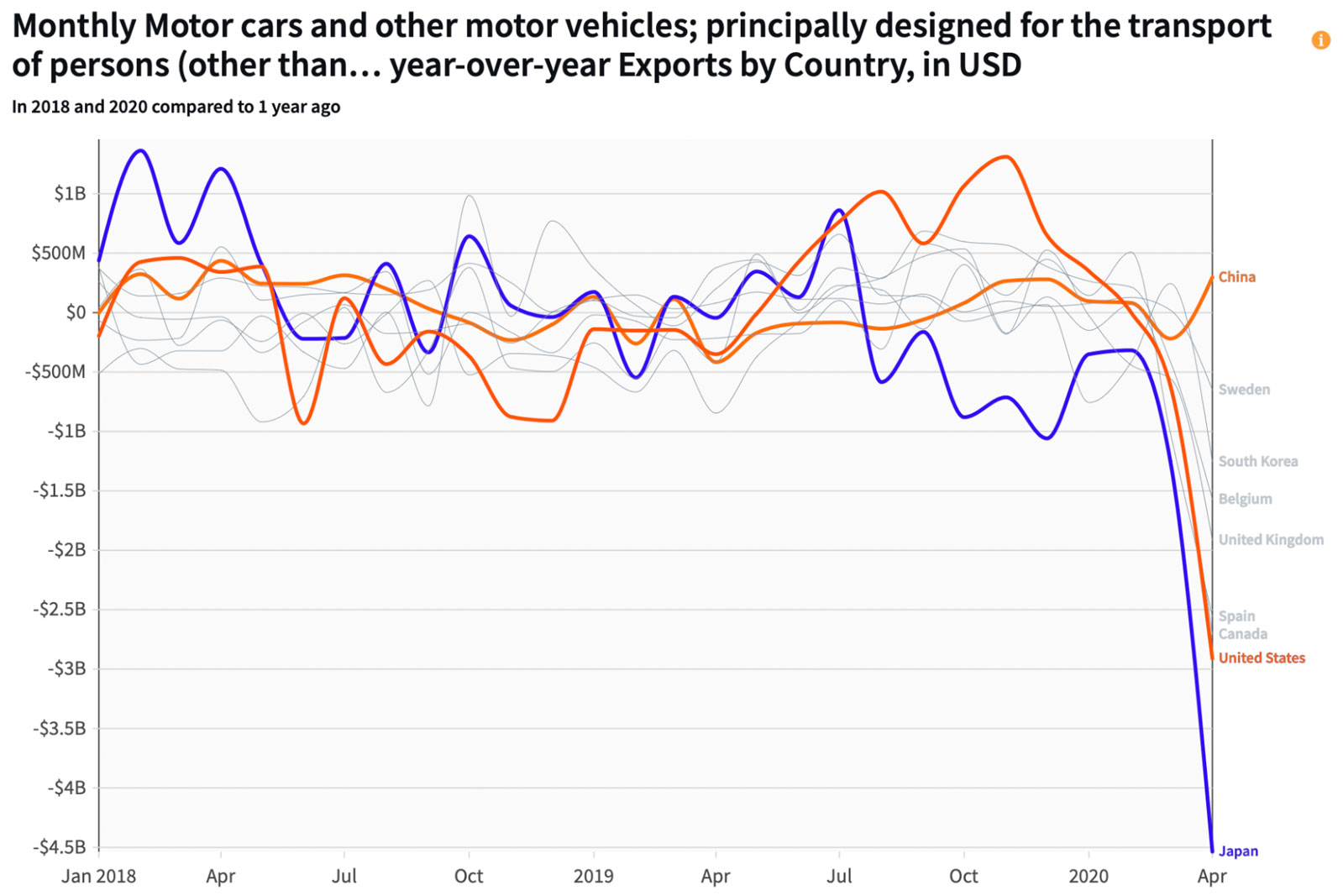 The shutdown forced automakers to reduce production and halt orders from suppliers, including chips. Vehicles rely on chips for everything from door locks to brakes. At the same time, there was increased demand for products depending on chips. For example, between April and September, in the U.S., the market for headphones (↑ $716M, 196%), video displays (↑ $1.17B, 93.9%), and broadcasting equipment (↑ $467M, 70.8%) soared. In this new market, chipmakers rerouted their supply to electronics. 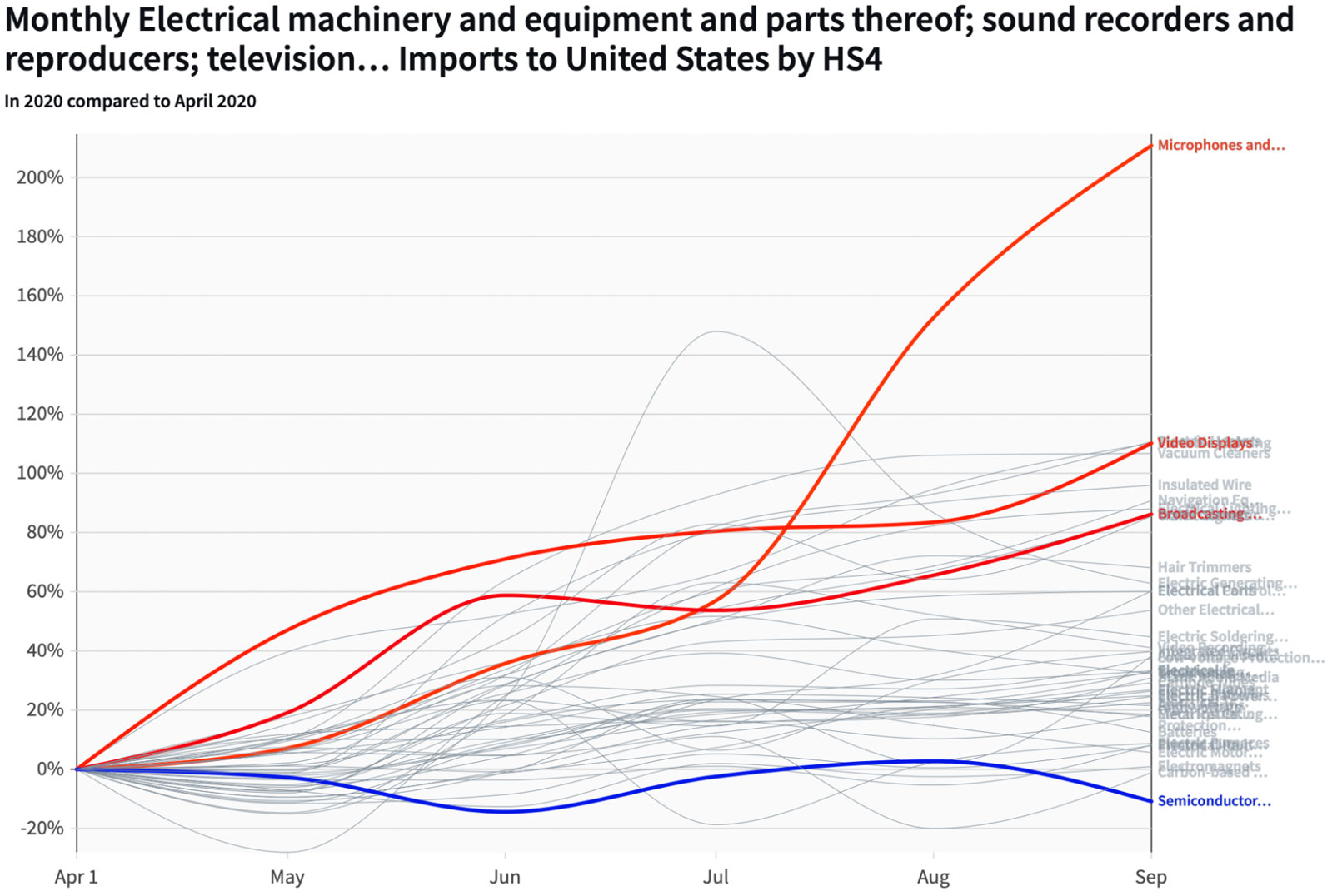 As the demand for cars was on track to return, chipmakers got renewed orders from the auto industry. However, big new orders are not easy to fill, and, on top of that, chip manufacturers had other lucrative products in high demand.

Most cars use older, lower-tech chips with lower profit margins. So, with the shift in demand, manufacturers had fewer incentives to develop more capacity to accommodate the increase in orders from the auto industry. Instead, they grew their production of more sophisticated chips, with newer technology to place more chips on a single silicon wafer.

By December 2020, with $669B (↑ 9.73%) of annual exports, integrated circuits became the most shipped product globally, accounting for 4% of total trade.

The shutdown marked some of the most significant reductions in trade on record. Trade plummeted in several products, while in others, it increased sharply, creating the largest variation in trade across sectors in decades. Then, as the economy started to reset and supply chains came under pressure to deliver, some countries were better suited to fill the gaps.

China, the first country to recover from the pandemic, was uniquely positioned to take advantage of the dramatic shifts in global demand. Later, other countries followed. In general, the recovery was better in economies less dependent on exports of fossil fuels and internal combustion cars —particularly those with the ability to reopen crucial supply chains ahead of others. For example, when supply chains came under more pressure to deliver electronics, integrated circuits, and medicaments, Costa Rica, Vietnam, and Ireland filled the gaps in the market. 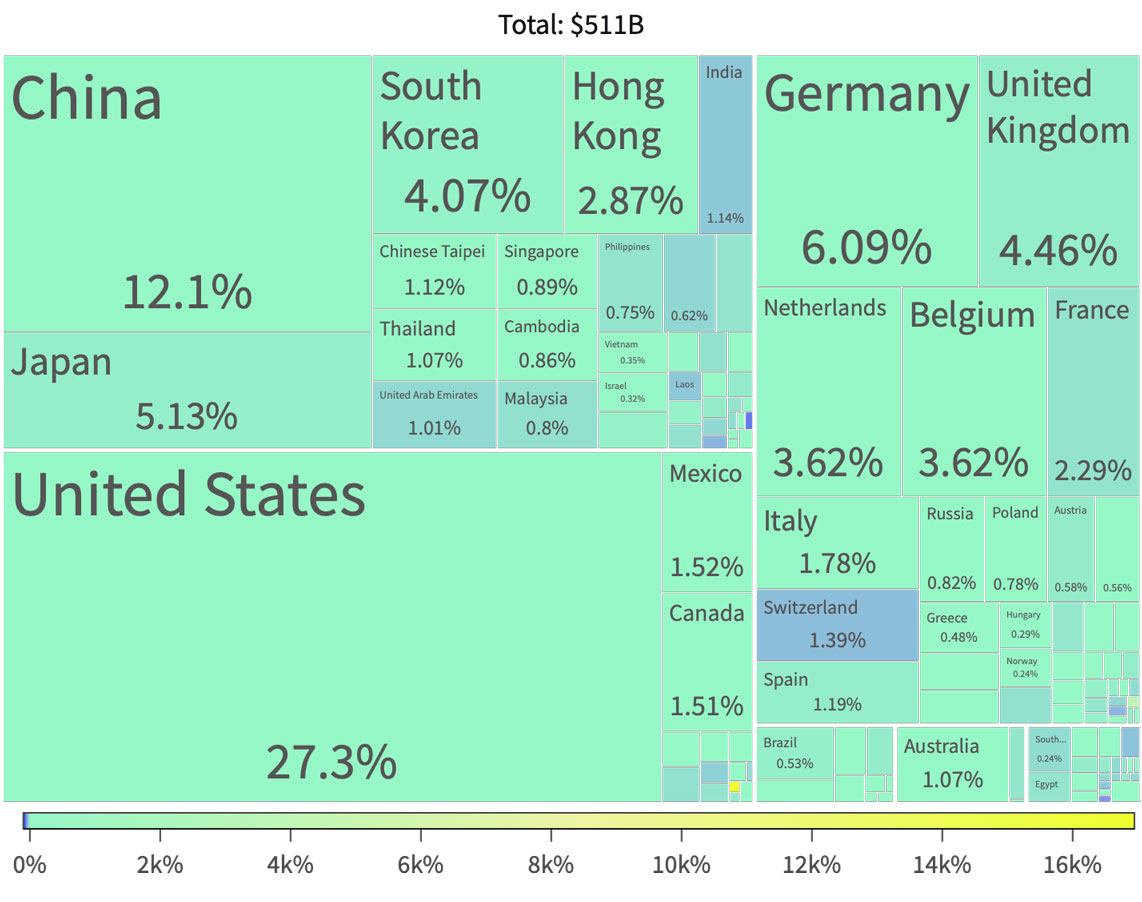 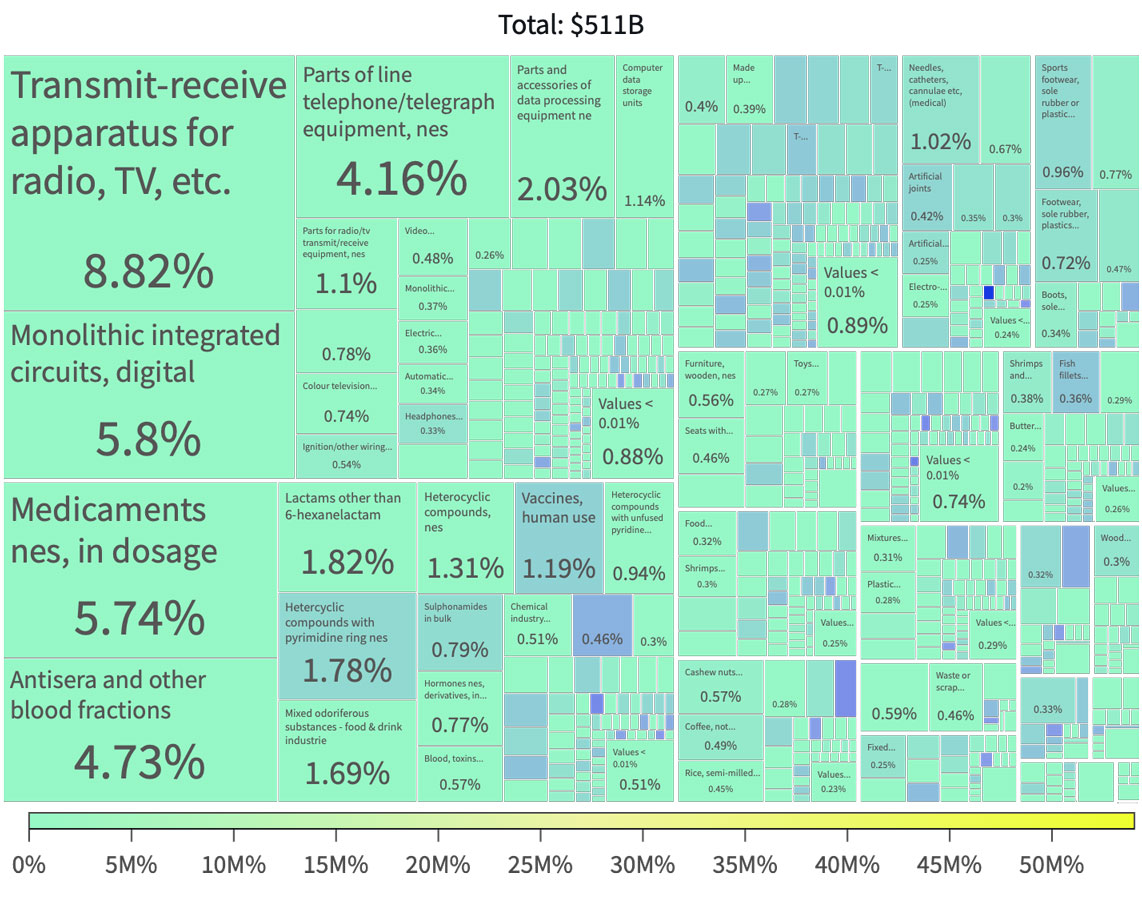 While it is unclear which of these changes in trade will continue, some will likely require long-term adjustments. Among the enduring repercussions of the pandemic, the electrification of transportation has sped up. For example, electric vehicles (↑ 53.5%), electric bikes (↑ 25.7%), and electric batteries (↑ 14.5%) had a successful year in trade. 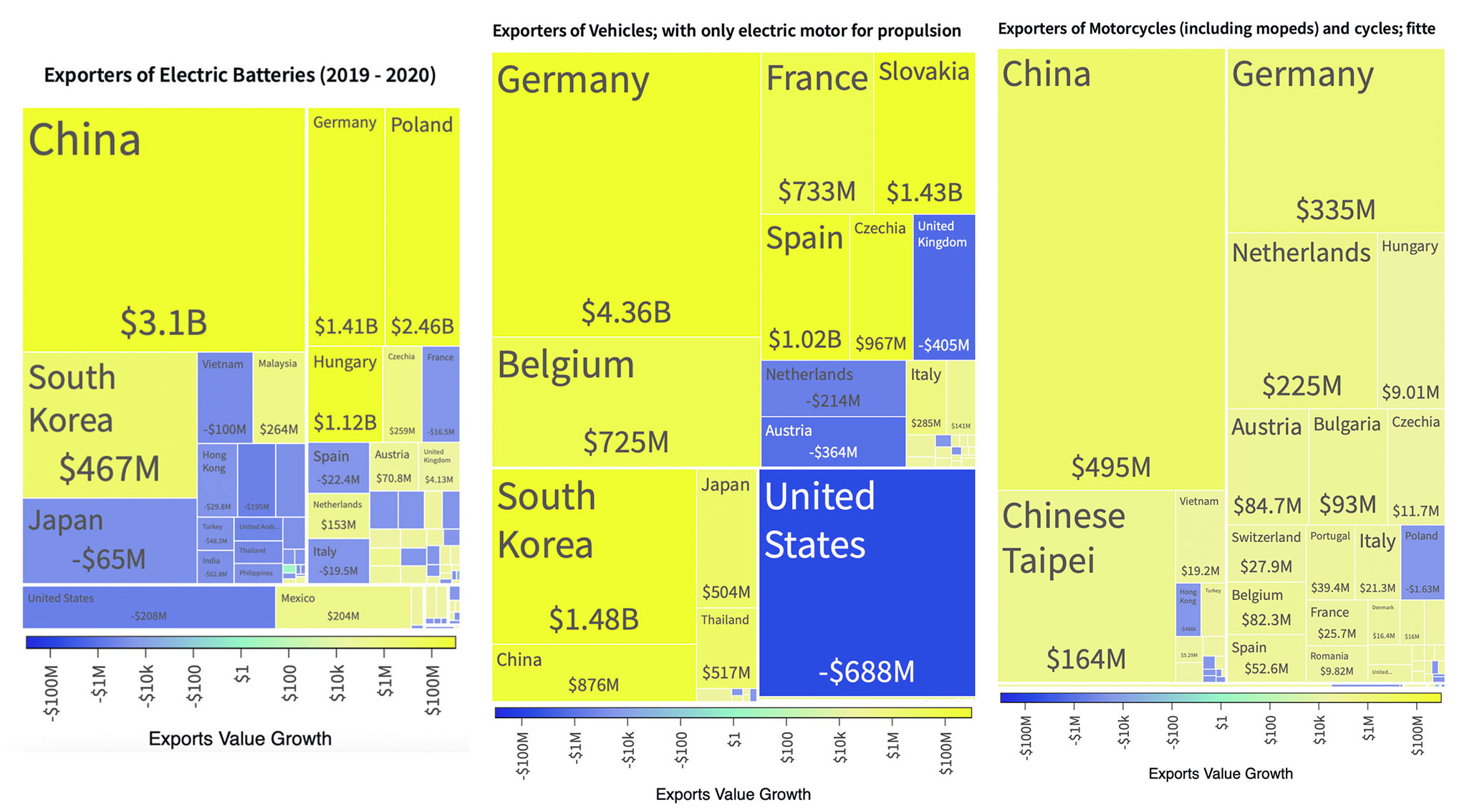 When the pandemic hit, shaking up supply chains, workforces, and markets, electric mobility products increased in exports. Moreover, the economic slowdown has significantly disrupted the auto industry, except for electric vehicles. 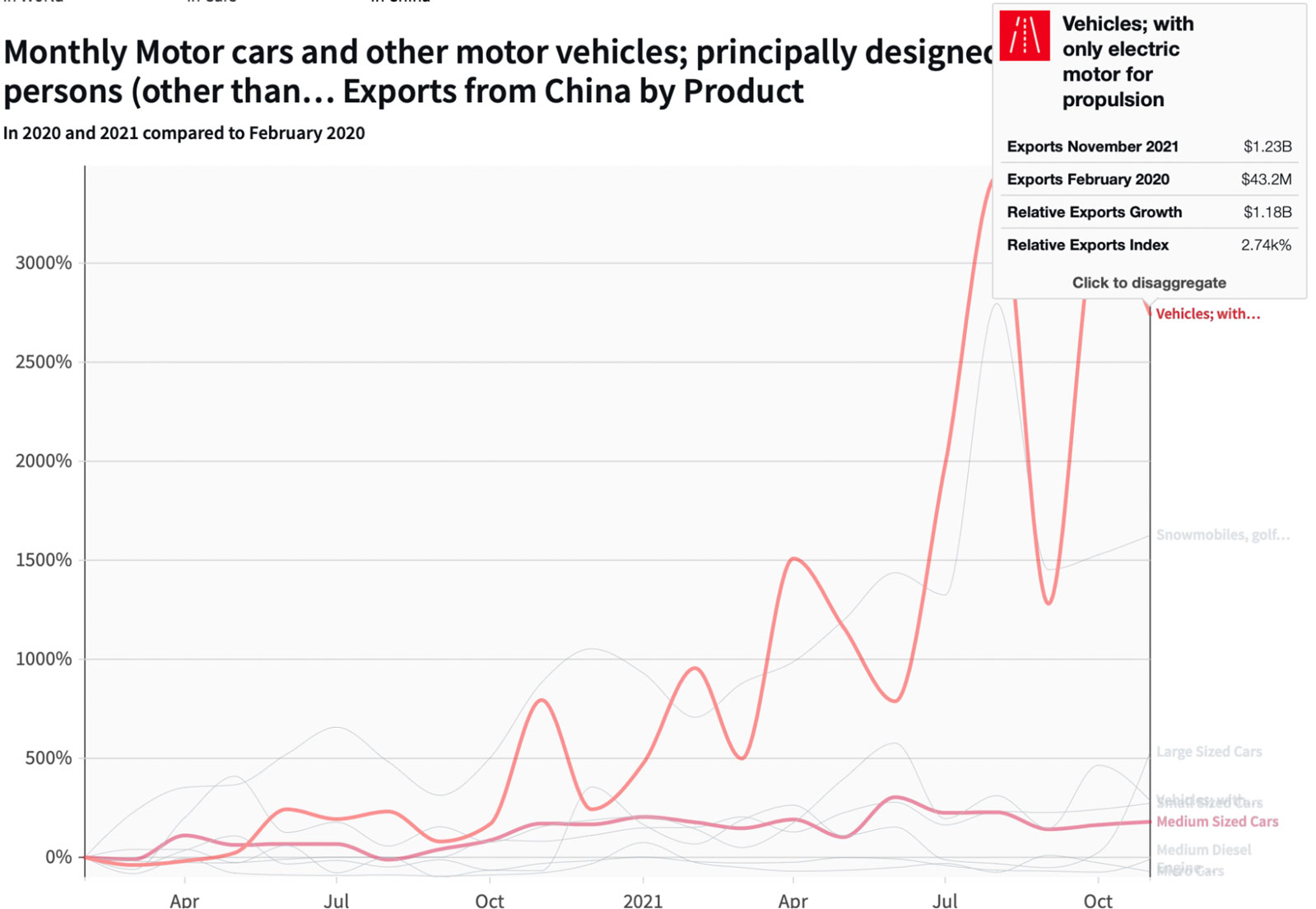 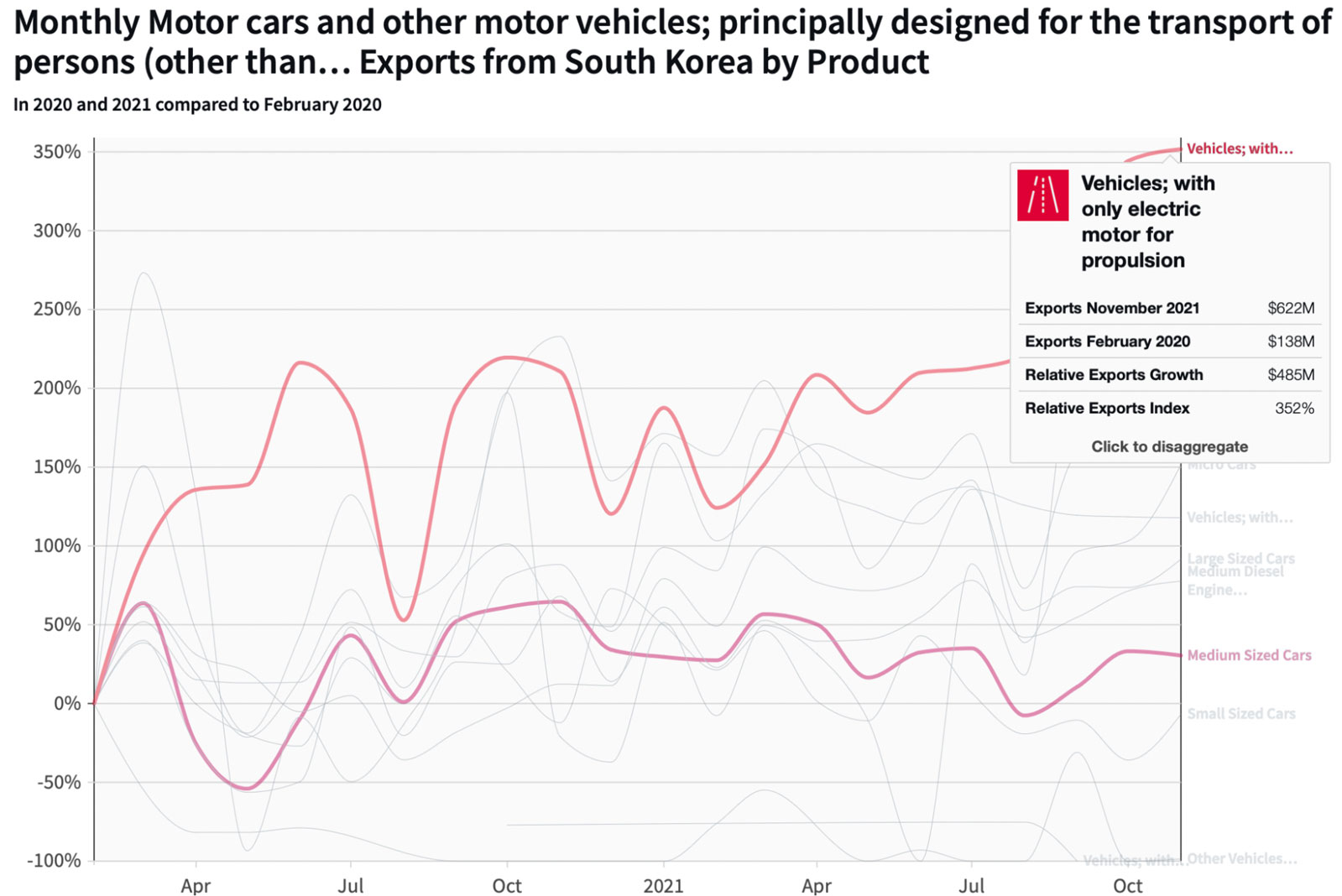 In 2020, countries with significant exports of fossil fuels, cars, or both dropped their share in total exports, while countries shipping gold, critical metals, electronics, and chips increased their size. 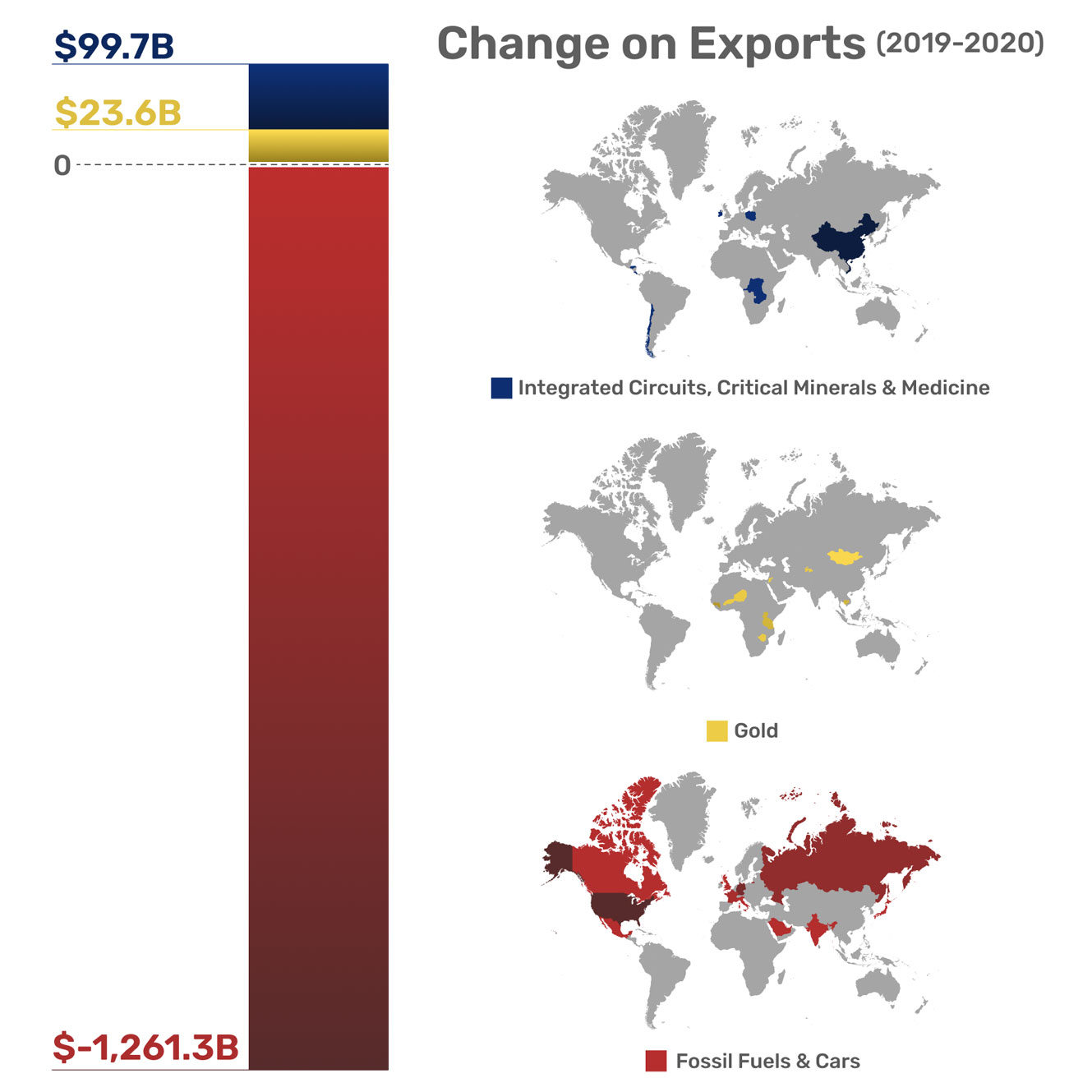 The plunge in trade in 2020 hides considerable differences across products, countries, and supply chains. The collapse in trade in early 2020 did not hit all products to the same extent, and the recovery did not lift all products equally either.

While it is still unknown which changes will be short-lived, the shift towards the digitalization of the economy and the electrification of transportation can be expected to have lasting impacts. And with it, the integrated circuit, the fundamental building block of all modern electronic devices, will continue its rise.